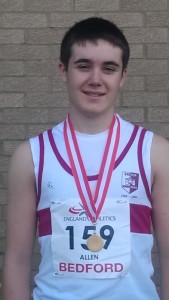 Sixteen year old Exeter Harrier Dominic Allen’s performance in the javelin at the England Athletics National Championships in Bedford has exceeded expectations with a new lifetime best and the bronze medal, adding 15cm to his previous best set last year. The realisation for Allen that he is now coming into form this season has pushed him to set his sights on the tough target of 60m with just a couple of competitions left in the 2014 outdoor season.

“I got off to an ok start after having had a week off” said Allen. “Was disappointed with the third throw when it was given as a no-throw. It was about 60m.” Allen’s fourth round throw of 58.29 placed Allen in third and he maintained this position throughout the remaining two rounds. “It helped with the weather conditions being good and throwing from the right end.”

Javelin success continued for Harriers with Jack Moncur competing in the same age group and finishing eighth with a best throw of 48.66.

Sam Talbot took a different approach at the Championships, entering an event new to him. Following his success at the National Combined Events Championships three weeks ago Talbot entered the 400 hurdles at the individual event championships. A third place finish in his heat in a time of 58.07 was enough to earn him automatic qualification for the final, where he placed eighth in 58.37.