Exeter Harrier’s Olivia Dobson and Sam Talbot have returned from the England Athletics National Age Group Championships in Bedford with a bronze medal apiece, and while Talbot will undoubtedly be disappointed with his result Dobson exceeded all expectations, claiming her first national medal in the U15 shot putt with a massive new lifetime best of 12.35, an improvement of 50cm on her previous best. Looking to gain added experience at top competitions Dobson had entered with the intention of simply enjoying the atmosphere with no real pressure. “I wanted more experience at this level of event as nerves got the better of me earlier in the season at English Schools leaving me feeling disappointed. This now means I’m fifth in the country.”

Dobson got a good first throw in, equalling her lifetime best at 11.85, and continued to build on this, and with the top eight qualifying for a further three throws Dobson, placed third at this stage, easily made the cut. “I threw my biggest throw in the very last round in the rain. I’m thrilled I got over 12 metres.” The eventual winner, Hannah Molyneaux from Nene Valley Harries and coached by the former Commonwealth and European champion Geoff Capes, broke the championship record to win gold with her best throw of 14.22. 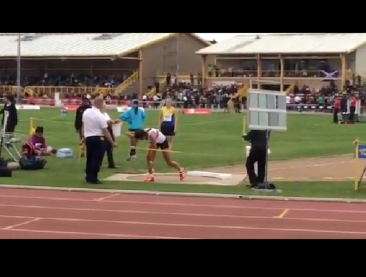 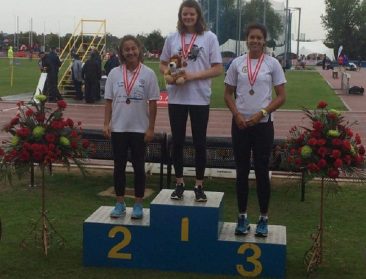 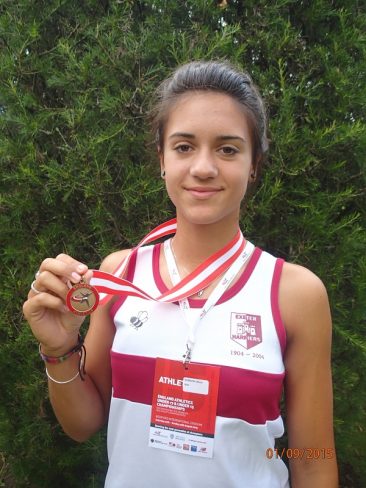 Following disappointment for Talbot in Cali, Columbia, where he suffered disqualification in the decathlon 400m for running out of his lane, he found history repeating itself with an identical situation to contend with in his heat of the U17 400, meaning he took no further part in the event. By the following day Talbot had moved on, and with the long jump competition under way he was confident of a better result. As ever, he sets his sights high, and with a pb of 7.19 was looking to replicate somewhere near this, eventually settling for bronze with his best jump of 6.74.

It was an early start for AnyaTurner who gave a superb display of long hurdling in the first track event of the championships, the U17 300 hurdles. She placed second in her heat in 46.68 to easily qualify for the final, and with gritty determination took full advantage of a good lane draw to place fifth in the final with an outstanding new lifetime best of 44.68 to put her tenth in the National Rankings.

Talented multi-eventer Jack Turner had his first taste of a National championships, finishing eighth in his heat of the U15 80m hurdles in 12.33, and overall equal sixth in the high jump with his clearance of 1.72, a height which he has bettered just once previously.

Amy-Beth Curtis also gained valuable experience competing in the U15 javelin.  Unable to find her earlier season form she finished nineteenth with 23.82.

Finn Mclear competed in the U17 steeplechase but was unfortunate to pick up an injury going over the first water jump and was forced to pull out.

English Schools U17 bronze medallist Jack Moncur opted not to compete, preferring to focus on this weekend which sees him selected for the UK Schools Games in Manchester on Friday followed on Saturday by the Youth Development League finals in Birmingham.