Steve Turnock pushed through the pain barrier to win gold in the javelin at the BUCS (British Universities & Colleges Sport) Championships in Bedford with a stunning display of throwing which saw him beat off two previous BUCS champions and coming very close to his personal best set back in 2013. Turnock took just one throw in the preliminary rounds to qualify for the ﬁnal, pushing out to 68.53 in perfect weather conditions. Unfortunately the following day he encountered shoulder problems, and following a massage and taping it was still touch and go if he started the ﬁnal. Now with cool cloudy conditions and a stiff right to left cross wind last year’s winner and  qualiﬁer leader Greg Millar opened the competition with a 66m throw. Turnock’s ﬁrst of 68.47 took the lead that he held throughout the competition but Millar did not give up without a ﬁght and he clawed back to within 5cm of Turnock’s best with a 68.42m in the ﬁnal round. Matt Hunt, also a previous winner, took the bronze medal with 62.34. Turnock’s next competition will be the Loughborough international on 22 May, an important competition opportunity for developing senior athletes as the build-up to the 2018 Commonwealth Games in Australia begins. 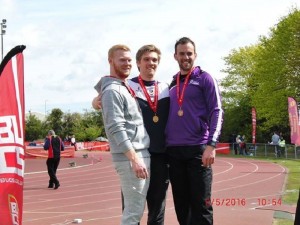