Exeter Harrier Caitlin Apps was one of the lucky fans of Britain’s greatest ever distance runner Mo Farah (coach: Alberto Salazar) to complete the most unforgettable two mile run of their lives, alongside the double Olympic champion himself, at Birmingham’s Alexander Stadium.

The #TwoMoMiles run for 25 lucky fans was a thank you to Farah’s supporters and also heralded his return to the city for the Birmingham Diamond League on Sunday 5 June, where he will begin his countdown to Rio.

Athletics fans were invited to enter, by explaining why they would like to run with Mo, via British Athletics social media channels.

Farah said: “It’s not often people come and run with me because of the pace I go and where I train.  These kids had to enter a competition and win it, so it was nice to get a chance to jog with them and talk to them. It’s exciting to be back and I’m really looking forward to competing here at the Birmingham Diamond League in June.”

The Birmingham Diamond League takes place at the Alexander Stadium exactly two months before the Olympic Games begin, on 5th August, and will play a key part in Farah’s preparations for the defence of his Olympic titles.

Fans that ran #TwoMoMiles will be among the crowd in Birmingham on 5th June, to support Farah and Britain’s best athletes as they begin the British outdoor season.

Well done Caitlin what an experience! 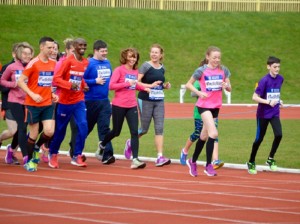