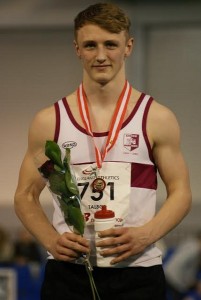 Exeter Harrier’s Sam Talbot had two aims at the National Indoor Championships in Sheffield, firstly to reach the final of the 60m sprint, and secondly to achieve a medal, hopefully gold, in his strongest event, the sprint hurdles.

On day one 16 year old Talbot eased through the heats of the 60m clocking 7.10 to win his heat, 0.18 quicker than his PB. “I was a little slow out of the blocks” said Talbot, “but it was 0.18 quicker than by best from last year so I was pleased. The semi didn’t go as planned, I tightened up in the last 20m, coming second so I had to rely on a fastest loser spot.” In a final loaded with top class sprinters it was job done for Talbot, crossing the line in sixth place with a new lifetime best of 7.09.

For Talbot day two was predicted to be a busy day, with an early long jump start then a long wait for the sprint hurdles late afternoon, but with the early start came a shock long jump performance.  Not expecting to get a medal in this event, but in second place for most of the competition, Talbot could easily have settled for the silver and a new lifetime best of 6.70 with his fifth round jump, but the focused and determined Harrier leapt to a massive 6.92 in the final round, pushing the leading leap of 6.81 from Elliott Thorne of Slough Juniors AC down into second. “My warm-up didn’t start well, I moved my run-up 3 or 4 times and still couldn’t get on the board and this continued through my early jumps. Fifth round was much better but by this time the leader had gone out to 6.81. For my final jump I got the crowd behind me starting a clap and this gave me added momentum down the runway. I took off well, managed to land it well with good leg shoot, and was amazed when they read out 6.92 and my coach screamed with excitement.”

Elation carried Talbot through the long wait for the hurdles, again easing through his heat with a winning time of 8.14, taking him straight to the final, and Talbot did not disappoint. “I was hoping to run under 8 seconds and although I won my heat it was nowhere near 8 and I qualified fastest for the final. Unusually for me I wasn’t nervous before the final as the pressure of winning a medal had already lifted.” In the final, with second through to eighth place a blanket finish, it was Talbot who pushed ahead from hurdle two and ultimately took the gold some three metres ahead of the others. “When I crossed the line I saw the clock had stopped on 7.99 and I was very pleased, however it was short lived as it was confirmed as 8.00. This leaves me with only one more chance to break the 8 second barrier in two weeks time.”

Talbot’s successful weekend saw him achieve three new lifetime bests, two National Indoor titles, places him top of the UK Age Group Rankings in both the long jump and the 60m hurdles, and puts him in a terrific position to challenge for the National Indoor Combined Events title in Sheffield on 22 March where he will contest the U17 Heptathlon. His superb performances also earned him a place in the England U20 team to compete at the Welsh Indoor International in Cardiff this weekend but Talbot, also a talented rugby player and part of the elite Exeter Chiefs Development Squad, has had to decline because of a previous commitment. “I am unfortunately already committed to England Rugby South West Division training.”

Looking to the outdoor season, Talbot is aiming for qualification for the World Youth Championships and the Youth Commonwealth Games in Samoa in September. To compete at his best in multi-events he is hoping to find a sponsor or two this summer.

“It’s things like, at the moment I’m trying to buy myself some pole vaults,” he explained. “Pole vaults are very personal because you need the right weight and things, and you need three depending on the conditions. I’ve raised £300 in grants so far but it’s £1,400 for the three, so a sponsor would really help.”  If anyone is interested in sponsoring Talbot, email lynn.talbot@hotmail.co.uk.