Dobson set herself a target of a top 10 finish, having placed fifth in the regional round. ‘My aim was to get PBs in all my events, I felt it was easily achievable as I’ve been working hard on all of them. Before the hurdles I was very nervous but as soon as I crossed the finish line safely I knew it could be the start of a successful day.’ A positive mindset helped Dobson to an incredible 13.53 in the shot putt, a new lifetime best by well over a metre, obliterating the previous championship record and placing her first overall. ‘I was very happy with that but quite surprised, I felt the throw itself wasn’t the best.’

Going into the high jump Dobson was leading by 100 points and didn’t feel too pressurised into having to produce an outstanding result, maintaining her lead going into the long jump, and a new lifetime best by 8cm of 5.00m meant she stayed on top, but her lead was now cut to 60 points. The final event, the 800, has been Dobson’s downfall in the past. ‘I cannot describe my feelings before the dreaded 800, I was just focusing on trying to get around without crying, my parents told me if I wanted to come first I had to stay within 60m of the girl that was in second, which didn’t happen, but I just hoped my time would keep me in the top three.’ Dobson ran a superb race, gritty determination pulling her around the two laps, her time of 2:39.68 being some 10 secs faster than she has previously ever run, eventually claiming bronze overall, and giving her a national ranking of third in the shot, third in the pentathlon, and her first International vest. ‘I’m so grateful for all the support everyone has given me, especially during the 800. Big thanks to Kevin Skinner, Richard Derrick and not forgetting my lovely parents. I cannot wait to put on the England vest.’

Anya Turner recorded two PBs in the IG Heptathlon, and a stunning display of focus and determination over the two days meant she posted consistently good results in the other events to pull her up into fourth place overnight, which she maintained throughout day two. Turner’s PBs came in the 200 at the end of day one, and the 800 at the end of day two, and an outdoor season’s best in the high jump. ‘After a difficult year both personally and physically I was extremely happy with the result, which I have been preparing myself for. A PB in the 200 and overall points was good as well as changing tactics in the 800m. There is plenty more to give.’ With the top four finishers awarded International honours she will join Dobson to represent England in December.

Jack Turner, competing for Somerset Schools in his first national finals, was disappointed with his seventh place finish in the JB pentathlon, having won the regional round in June, and reflected on a missed opportunity, but did win team bronze. ‘I was full of mixed emotions on Saturday, I wasn’t very happy with my 7th place because I know I was capable of an England vest and possibly a medal. I was very happy to pull through from injury and illness from the day before to get that third place for team Somerset. Every event wasn’t very good for me, apart from my shot putt, and my 800m was enough to pull the team through to third.’ Turner’s shot putt of 11.22 was a new lifetime best by well over a metre, and despite long jump being 36cm down he had solid performances in the other events to give him a total points score of 2793, some 80 points short of his best.

Sam Gooding, competing for Devon in his first season placed 10th in the JB pentathlon, and was thrilled with the whole experience and the camaraderie between the competitors which is often present in combined events competitions. ‘I loved every second of it, everyone was really friendly and when someone did a new pb it was swiftly followed up with a handshake from the other competitors.’ Gooding excelled with 4 event PBs and a final score PB, which included a new legal best in the hurdles, a 5cm pb in high jump, and a stunning new PB of 5.86 in the long jump. ‘I injured myself in the first jump meaning I only jumped the once, but thanks to the Kent team’s masseur I was back on track and then cleared 1.70 in the high jump which I’m so proud of.’

Isobel Pinsky placed 14th in the JG pentathlon in her first national combined events championships, and also has next year in the age group. Pinsky was just 1cm off her best in the high jump with 1.54 and ran a superb new lifetime best in the 800 to pull her up from 20th to 14th overall.

Jessica Dobson did well to place 11th in the SG heptathlon following a prolonged period recovering from injury with solid performances all the way through, with the 800 being a new lifetime best performance. Dobson also claimed a team bronze.

Sam Dove, also in his first national finals, finished 24th in the IB Octathlon recording a 1cm PB in the javelin, and a new best time in the 100 hurdles.

Olivia Dobson and Anya Turner now go on to represent England in the one-day indoor SIAB (Schools International Athletics Board) Home Countries International at the Emirates Arena, Glasgow in December. 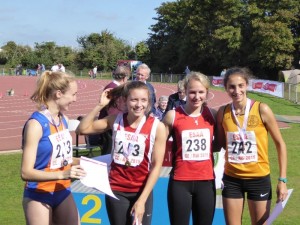 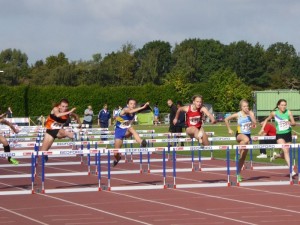 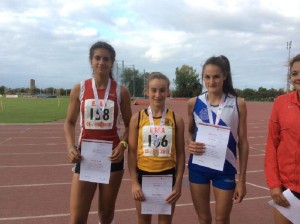 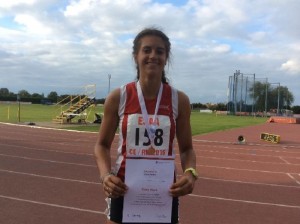