What a weekend for two of Exeter Harriers’ young up-and-coming athletes at the National Indoor Age Group Championships in Shefﬁeld with 15 year-old Molly Canham, creating her own Super Saturday with gold in the U17 800, and 18 year old Sam Talbot, a Super Sunday, with gold in the U20 long jump and silver in the 60 hurdles.

Great Britain multi-eventer Talbot entered his two favoured events and with both timetabled for the same day he was in for a busy but meticulously planned schedule. “I didn’t really know what to expect going into the competition as a small hamstring tear just before Christmas meant I hadn’t competed in anything but long jump since August.” The long jump started well for Talbot but with 7 athletes having previously recorded distances in excess of 7m it was always going to be quite a show-down. “I held the lead with 7.22 from the ﬁrst round before extending it with a 7.37 jump in the 4th round. The lead was taken from me in the ﬁnal round when Reynold Banigo jumped 7.42 but I still had one jump to respond.” Talbot kept his cool, getting the crowd behind him with a prolonged clap during the run-up and running through the board nicely. The team of ofﬁcials took their time measuring but the reaction from Talbot was enough for the crowd to know he’d done it, ecstatic as he punching the air before the scoreboard announced the distance. His ﬁnal jump of 7.48, just 3cm off his lifetime best, was good enough for the national title.

Talbot then had to switch attention to the 60 hurdles. “I qualiﬁed for the hurdles ﬁnal in a pb of 8.92 in the heats but I hit the last hurdle hard so knew there was more in the tank for the ﬁnal. I got out well in the ﬁnal and was having the run of my life, pulling away from the ﬁeld but the last hurdle came back to bite me again and I clattered it with my trail leg to come home for second in another pb of 8.83. Although I’m pleased to knock almost 0.2 seconds off my pb it was a little frustrating to think of what might have been if not for the last hurdle.”

It’s now back to hard training for Talbot as he prepares for the outdoor season. “I’m yet to decide when I’m going to do my ﬁrst decathlon but I’ll be looking to put together a good score so I can qualify for the European Junior Championships in Italy this summer.”

Canham, the current UK indoor and outdoor 800m champion, has just started competing as an U17 and was keen to prove she hadn’t lost any of her previous form.

Usually preferring to go out fast and run from the front, from bell to tape, Canham changed her race plan to match her closest opponent, Olivia Vareille, the current Scottish Champion over 400m and 800m.

Always in the lead Canham ran a cautious first 300m, going through the bell at 400m at a conservative 66 seconds, before turning on her speed. She kicked hard, with Vareille attempting to match her pace. The two left the rest of the field behind as they pushed over the final two laps, with a supportive crowd cheering them on. Canham held onto the lead despite Vareille’s best attempts to catch her, to win in a respectable 2.11.94. Vareille ran a season’s best of 2.12.27 in second and Hallamshire Harriers’ Saskia Huxham came through for bronze in 2.14.28.

“Molly was thrilled to win the under 17 title at her first attempt. She was very nervous going into the race but executed her race plan perfectly showing that she’s a force to be reckoned with. We knew she had great finishing pace and this gave her a chance to use it. The race was very exciting to watch.” said proud dad and coach, Kevin Canham. Brian O’Hare, Exeter Harrier’s Coach, added “Molly deserved it as she works so hard in training, frightening all the boys!”

Canham is extremely excited as she has now been selected to run for England in her first International in Cardiff next weekend. 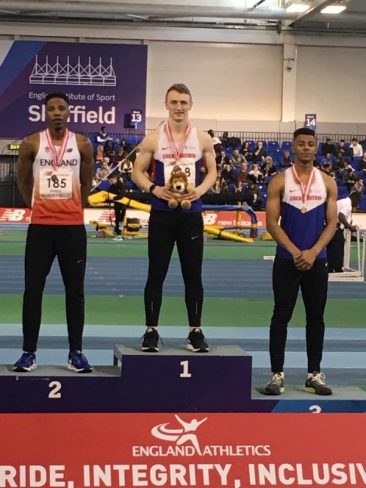 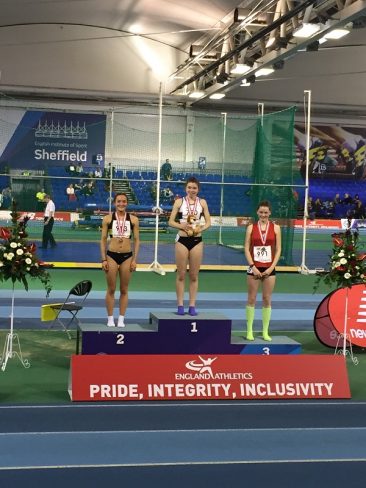 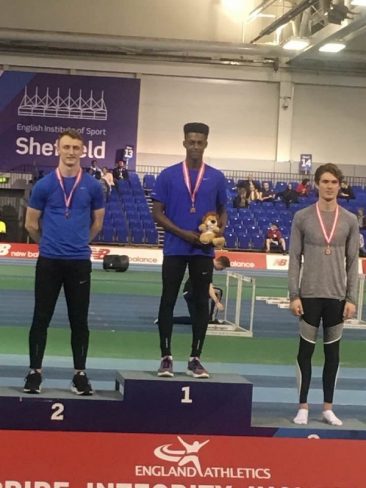