National U15 Indoor 800 Champion Molly Canham switched distances at the Devon Open in Plymouth, opting to compete in the 1500 and setting a new lifetime best by just over 3 secs, this  win placing Molly 2nd in the early-season national age group rankings.

Sprinter Rachel Champion performed well to achieve 2 ﬁrst places in the U15 100 with 13.59 and 200 in 28.46, both into a very strong headwinds, and Samidi Nanayakkara won the 300 (46.89). Matthew Williams and Nathan Blatchford took the top 2 places in high jump, both clearing 1.35 with Williams taking the win on countback, and Blatchford also coming runner up in hurdles (15.13). Positions were reversed in long jump with Blatchford claiming the win with a new lifetime best of 4.46 and Williams runner-up with 4.41. Williams also won the triple jump with 9.57. 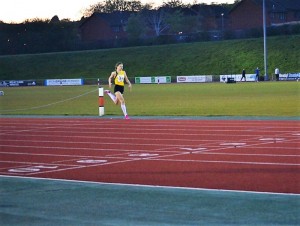 Photo of Molly running at the Exeter April Open Meet

Exeter Harriers again had athletes competing in the Devon & Cornwall Composite Team for the U17/U20 Youth Development League ﬁxture in Plymouth, with Katie Olding having an easy win in the U20 800 (2:17.03) and Madeleine Roche winning the B string (2:17.51). Caitlin Apps won the B string 1500 with a new lifetime best (4:56.41), Jamie Anderson equalled his PB in the high jump, again clearing 1.90 for 2nd place, Lily Mills had a convincing win in the shot putt (9.37) and claimed the win in the B string javelin (30.33), Dominic Allen was 2nd in javelin with 53.12 with Jack Moncur winning the B string with 47.41