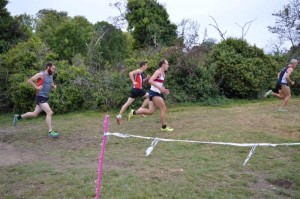 Exeter Harriers’ athletes produced a good start to their cross country season with a team of 28 making the journey down to Plymouth for a Brooks Westward Cross Country League fixture. With good underfoot conditions, times were very quick and the competition in all the races was very competitive.

Jasmine Wellman marked her debut in the league with an outstanding performance over the 2470 metres distance to comfortably win the under 13 girls race. Runa Manby backed her up well in 6th place in 10.08 with Brooke Coldwell 16th in 10.35, Katelyn Wells 20th in 11.05 and Courtenay Howard 25th in 11.35.

A number of the under 11 boys athletes were marking their debut in the league with good performances with debutant Sam Mills finishing 4th in 5.50, Cameron Bryson 10th in 6.07 and Louise Chamberlain 18th in 6.29.

This was a steady start for the club and we will be looking to improve come the next fixture on the 9th November at Newquay.