There were some superb results from young Exeter Harriers at the Devon Sportshall County Championships, with 31 medals won across the various age groups, and with the opportunity to represent Devon at the Regional Championships, at stake, all 10 Devon clubs were out in full force at Dawlish Leisure Centre.

Imogen Bond was outstanding for Harriers with golds in the U10 1 lap race and the 1 lap hurdles, and silver in 2 laps, with Evie O’Brien also performing well with a silver and 2 bronzes in standing long jump, chest push and javelin, Isabella Peyton-Jones claimed gold in the chest push, and Evan Murray took bronze in the 2 laps.

“All the Exeter athletes did such an amazing job yesterday, especially the U10 boys who were competing for the very first time, and we got a fair few medals overall” said Exeter Harriers Team Manager Debbie Blatchford. “We came fourth overall, beaten by City of Plymouth AC, Erme Valley Harriers and Torbay AC, with our U13 boys winning their age group and the U10 girls were runners-up.”

Sportsthall Athletics is a fun, indoor inter-club competition for age 8yrs to 14, is recommended and endorsed by England Athletics and provides an essential component of the competition framework for athletics. Email sportshall@exeterharriers.org.uk and come and join us for a training session. 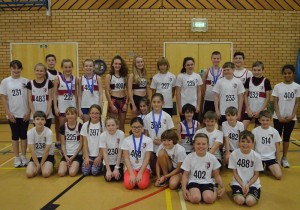