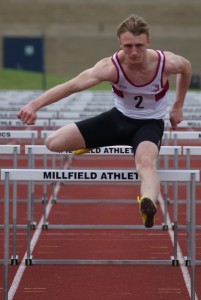 16 year old Exeter Harrier Sam Talbot’s first attempt at gaining the decathlon qualification standard for the World Youth Championships in Cali, Columbia in July was on track during day one of the Somerset Combined Events Championships at Millfield, but as is so often the case with multi events, all hopes faded following disaster in just one event, the pole vault. Competing as a guest alongside the senior and under 20 men, Talbot failed to clear his opening height at all three attempts.

“I knew I had to perform well to stand a chance” said Talbot, and with the qualification standard set at 6800 points day one could not have got off to a better start with a new lifetime best in the 100m of 10.80. “It was wind assisted and I was disappointed to see the reading show +2.4, just .4 too much to be a legal time.” Long jump followed and Talbot took full advantage of the near perfect conditions and zero wind speed reading, leaping to a massive new lifetime best of 7.14, adding
59cm to his previous outdoor best. “Despite shortening the last three strides into the board I managed to maintain enough speed and make use of the added height the shorter last stride gave me. With a bit more work on the run-up, adding two extra strides and getting consistency into the board a jump of 7.25 could be easily achievable which would qualify me for the Youth Commonwealth Championships in Samoa.”

The high jump was the low point of the first day for Talbot. “I could only manage a clearance of 1.66, but the 400m was another PB (49.90) even though I got an awful start and didn’t go off hard enough. By now the weather conditions were far from ideal and I finished the day on 3755 points.” The first event on day two was the 110m hurdles, recording a time of 14.38 and improving fractionally on what is only Talbot’s second run at this new U18 distance. “I was disappointed with my time, I’m hoping to get near 13.75 this season. It was a technically poor race, twisting and collapsing over a couple of hurdles.” The discus was next and a best throw of 35.15 gave him another new lifetime best, however Talbot is renowned for setting his aims high. “I’d been throwing further in training so I was a little disappointed with that too.”

Disaster then struck in the pole vault with Talbot failing to clear his opening height. He carried on, throwing an incredible 8m PB in the javelin with 52.34. “I ran a fairly average 1500 and finished up on 6430, just 370 points away from what I needed.” Of note is that if Talbot had cleared his opening height of 3.00m in the pole vault it would have added 357 points to his total. “I now only have one more chance to qualify in Bedford in around a months time and hopefully everything will go to plan there.” We wish Sam all the very best of luck.