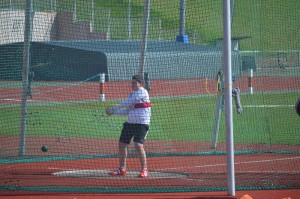 The wind played a big part in performances for Harriers at what was for many athletes the first full competition of the season, having an adverse effect on the sprints and hurdles, hampering the middle distance runners but bringing good performances for the long jumpers.

Outstanding athlete was Katie Chapman, who won three golds and claimed a couple of new lifetime bests in the U13 shot putt with 7.58 and long jump with 4.47, and also equalling her lifetime best in the hurdles with 13.14, with this race recording the strongest wind reading of the day at -5.00. Rachel Champion also had superb performances with wins in the sprints, both lifetime bests, with 11.03 for 75m and 21.93 for 150m (wind -4.3), and Brooke Coldwell won the 600 in a new PB of 1:50.51 beating her nearest rival by almost ten seconds. Theodore Jackson Clist claimed two golds with a convincing win and new PB in the 75m in 10.78 and was just 1cm off his best in the long jump with 4.61. Craig Moncur took first place in shot putt with 7.36 with Fraser Moran claiming second with 6.54 and winning the javelin with 21.23, both new PBs.

Sam Mills’ consistent efforts in the U11 600 were rewarded with gold in a time of 1:57.85, beating the second placed athlete by a good five seconds. Mills also won the vortex throw with 33.37 and claimed silver in the 60m with 9.75. Newcomer Gus Tiernan struck gold twice in the long jump and hurdles with 3.26 and 13.25 respectively, and gold medals were also won by Scarlett Livingstone in the 600 with a new lifetime best of 2:04.92, and Aimee Blatchford in the hurdles.

Josh Tyler had an exceptional day winning three golds, with new lifetime bests in the U15 discus with 22.23 and hammer with 24.52, and a further win in the shot putt with 8.67. Two more throwers to excel were Amy-Beth Curtis, claiming gold in the javelin with a new best of 25.18, and Olivia Dobson in the shot putt with a PB 10.93. Jack Turner didn’t allow the wind to hinder his performance in the high jump with a superb winning jump of 1.63, a new PB by 5cm and winning by 8cm, and Elliot Moran claimed gold in the 800 with a new PB of 2:12.58.

16 year old Sam Talbot, currently striving for qualification for major Junior International Championships later in the season, ran the rarely-run U18 110 hurdles spec, and was some way off the standard on this occasion, clocking 14.46. Talbot also took gold in the U17 discus with a new lifetime best of 32.84. Jack Moncur won the javelin with ease with 51.32. Anya Turner had a good run in the 300 hurdles, winning gold in a new lifetime best of 47.75 and Lily Mills claimed two wins in the javelin and shot putt with 35.43 and 11.37 respectively. Isabella Hargreaves just missed out on gold in the high jump, equalling the winning jump with a new lifetime best of 1.50 but missing out on count back, and also taking silver with another new best of 5.03 in the long jump, and Phoebe Killen claimed gold in the 3000 in 11:25.49.