Exeter Harriers had 10 athletes travel to Millﬁeld School for the Somerset/Open Combined Events Championships, some competing for Somerset Schools and striving for selection for the Regional Championships, some using the competition as a warm-up for the Devon Schools Championships in a months time. This is always class competition, in past years athletes from across the country attending to obtain early-season marks, and this year was no exception with top international Katerina Johnson-Thomson due to compete but withdrawing at the 11th hour. Olivia Dobson, 2015 England Schools International Pentathlete, had a taste of a new age group and a new event and produced a consistent string of excellent results in the 2 day heptathlon to just miss out on the gold by 68 points. Olivia set new lifetime bests in 80 hurdles (12.74 into a strong headwind), 200 (27.36), javelin (32.51) and 800 (2:38.90), and again her biggest points-earner was the shot putt, with her 13.13 putt being the furthest in the competition.

Jack Turner, the 2015 Regional U15 pentathlon champion, competing for Wellington College, also moves up to the 2 day U17 octathlon, stamping his mark with a good early-season score of 4255 for 6th place overall and recording new lifetime bests in 100 hurdles (15.20), high jump (1.80), long jump (5.75) and javelin (42.69), and despite having to settle for a safe throw of 18.78 in the discus following 2 no-throws this performance should see him selected to represent Somerset in the SW Schools Championships in June.

Isobel Pinsky produced a string of good performances in the U15 pentathlon taking the top high jump of the day with 1.57 and an excellent attempt at 1.60, a new lifetime best in shot putt with 8.20, and a strong hurdles result (11.84) to place 3rd overall in a tense and dramatic competition dominated by 4 Devon multi-eventers. Isobel missed out on silver by 1 single point to Emily Bee of Plymouth AC, with Sammie Harris of Erme Valley Harriers the eventual winner, and Emily Tyrrell of North Devon AC just 20 points behind Isobel in 4th. All 4 achieved National Standard performances, entirely outclassing the other competitors in their age group, and have sensibly used this competition as a good springboard to the Devon Schools Combined Events Championships in a month’s time. Andrea Gilbert, competing for Kingsmead School, achieved 12th with 2369 points, recording promising new lifetime bests in long jump (4.58), high jump (1.39, a 12cm improvement), and shot putt (7.00), and awaits conﬁrmation of her selection for the Somerset Schools team going forward to SW Schools with Jack Turner.

Emily Adcock had her ﬁrst taste of large competition in the U13 Quadrathlon, placing 18th out of 30 competitors, and setting a new PB in the shot putt of 4.44, heavier than she’s used to in the U11 age group last year, but the highlight of Emily’s day was the 800, leading her race and easily winning in 2:45.96, fractionally outside her pb and the 4th fastest of the day.

Both Jessica Dobson and Anya Turner unfortunately withdrew from the U20 heptathlon, Jessica at the end of day 1 and Anya following a knee injury in her ﬁrst trial of the long jump on day 2. 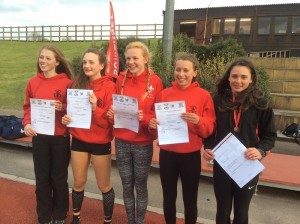 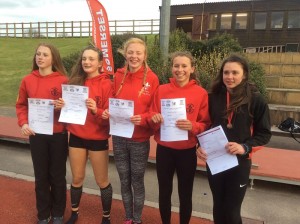