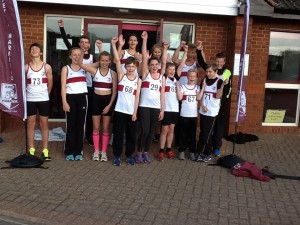 Exeter Harriers competing at the Devon Schools/Devon County Combined Events Championships at Exeter Arena proved a cut above the rest as the final results were announced at the end of a superb day of camaraderie and rivalry, and in true combined events style it was a day of ups and downs for the athletes as they worked their way through the five pentathlon events.

Theodore Jackson Clist won the U13 boys’ event in a closely fought contest with second placed fellow Harrier Craig Moncur. Each achieved four new lifetime bests, with Jackson Clist leading after the first event with 13.34 in the hurdles to Moncur’s 13.67, but losing the lead to Moncur after the shot with Moncur putting 8.84 to Jackson Clist’s 7.55. A superb leap of 4.82 in the long jump pushed Jackson Clist back into the lead, and with both athletes achieving 1.36 in high jump he maintained his lead going into the 800. Moncur ran the better race, finishing seven seconds ahead of his rival, but Jackson Clist had enough of a cushion to take the overall title with 1680 points to Moncur’s 1647.

Nathan Blatchford also did well for fourth place, including new lifetime bests in the long jump with 3.97, shot with 5.47 and a 7cm PB in the high jump with 1.27, finishing on 1125 points, just pushing club mate Kester Welch into fifth with 1099 points. Finley Norman was ninth with 716 and Kurt Gilbert tenth with 701.

Katie Chapman won the U13 girls’ event with consistently good performances in her first four events, including an excellent high jump of 1.48 which currently places her third in the National Rankings in this individual event. Chapman’s other results were 4.43 in long jump, 12.92 in hurdles, 7.79 in shot, with the final event, the 800, proving to be her most challenging event and she was disappointed to finish in 3:19.00 but easily held on to her overall lead to amass a total points score of 2084, over 300 points clear of second.

Competing alongside Chapman was fourth placed Evie Dewhurst with 1531 points, Chloe Harris in sixth with 1487, Izzy Steele in twelfth with 1271, Marlie Douglas in eighteenth with 932, Jessica Davies in twenty-first and Livia Singer in twenty-second.

Jack Turner claimed the U15 Devon County AA title to go alongside his win in the Somerset Schools Championships a month ago. Turner attends Wellington School, but by virtue of him living in Devon he is cleared to compete in the Devon County Championships. Turner eased through the events, leading all the way, achieving a new legal lifetime best in the hurdles with 12.39, a new best in shot with 9.58, and also in high jump, clearing an excellent 1.70 to place him joint 13th in the National Rankings. Turner’s overall score of 2453 ensured the title was his, and he still tops the UK Pentathlon rankings with his score from the Somerset Schools Championships.

Newcomer Sam Gooding was second with consistently good performances across the five events to score 2163 points, and middle distance specialist Elliot Moran was fourth, winning the 800 in 2:12.00, nine seconds clear of the field.

The most competitive age group was the U15 girls, with first-rate performances from the top four athletes, who are all now placed in the top six in the National Pentathlon rankings. Samantha Harris of Erme Valley Harriers was the winner, Emily Bee of Plymouth AC second, and Harriers’ Isobel Pinsky and Olivia Dobson third and fourth. Pinsky achieved new lifetime bests in all events, with 4.66 in long jump, 12.11 in hurdles, 7.10 in shot, 1.52 in high jump and 2:32.00 in 800 to total 2783 points, a new best points score by 178 points. Dobson achieved new lifetime bests in the long jump with 4.72, hurdles in 12.29, and a stunning performance in the shot with 11.50 to place her seventh in the National Rankings and top the South West Rankings in this event, and eventually scoring 2709 points.