16 local athletes travelled to Gateshead for the English Schools AA Championships, 14 competing as part of the 35 strong team for Devon and 2 for Somerset, and this year it has been the throwers who have excelled with Jack Moncur gaining bronze in the IB javelin and Trixie Nicholson bronze in JG javelin.

Nicholson, who attends Blundells School, is a name new to javelin, and she has come to the fore in a big way this season despite not being a member of a club. Her best throw in the Championships of 39.60 was a little down on her PB of 42.63 from the County round. “Trixie trains at school with the rest of the athletes of all ages and works on her throwing with Mr Dylan Smart (Chemistry teacher)” said Vicky Gill, Head of PE at Blundells. Sam Kennaugh, also Blundells, came 18th in JB discus with his best throw of 31.15 and Lucy Walliker cleared 1.49 in IG high jump for 19th place. 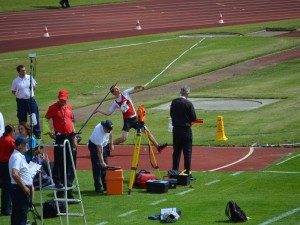 Moncur, who holds the Scottish U16 National Title and is a junior international, is a member of the George Eccles-led throws squad at Exeter Harriers and, supported by Dave Turnock, the training group have produced many excellent javelin throwers. Moncur’s best throw of the Championships came in the second round, with a massive 57.94, adding well over 2 metres to his previous lifetime best. “There were 15 athletes and I was the last to throw” said Moncur, “I was delighted with my first two throws but the other rounds were a disappointment. I was trying too hard and my technique was affected.”

“Jack has trained consistently hard throughout the winter and summer so far” said Eccles, “and his technique is becoming more efficient with hard work and commitment as he continues to develop more enhanced skills in all aspects of this event. He gave maximum commitment to his training for this competition and he produced an excellent performance against the top throwers in the country with two successive PB throws. We will now prepare for Jack’s defence of his Scottish National Championship Title.” Dominic Allen was 8th in the SB javelin, throwing 52.35, Lily Mills 13th in IG javelin with 35.28, Thomas Putt 4th in JB javelin with 45.04, Amy-Beth Curtis 19th in JG javelin with 26.14 and Olivia Dobson 10th in JG shot putt with 11.16. “Dominic has experienced injuries this year, and these have inhibited the consistent club night technical development and throwing sessions which are essential for javelin throwers” said Eccles. “He, like Jack, has much potential, and now he throws senior javelin it will take time for him to adjust to the heavier implement once he is fully fit. Thomas is an exceptional U15 thrower who is naturally talented and, with minimal technical training gained 4th position at English Schools. I believe he has great potential and will become another successful thrower to follow in the steps of our more senior javelin team members.” Eccles went on to say “Lilly Mills, Olivia Dobson, and Amy-Beth Curtis also represented Harriers in our Devon team, and on this outing were unable to set PBs but all have great potential, which we will continue to develop on Club training evenings throughout the year.”

On the track Fin McLear ran well in the IB 1500 S/C, chopping 4 secs off his lifetime best to finish 4th in the final, and Elliot Moran ran a new best of 2.01.77 in the heats of the JB 800 to place 2nd, giving him automatic qualification for the final where he had another fine run of 2.01.96 to place 8th. Moran is a member of Brian O’Hare’s Exeter Harriers endurance squad. Isobel Pinsky placed 4th in her heat of the JG 75 hurdles with 11.64, Jessica Dobson was 5th in her heat of the SG 200 in 26.06, and Jack Churchill ran a fine heat in the IB 200 in 22.77 giving him automatic qualification for the semi-final but was unfortunately forced to pull up with injury.