Exeter Harriers athletes produced top performances to dominate the results lists at the Ken Trickey Great West Open at Exeter Arena. With athletes attending from across the South West the sunny weather saw numerous top performances, and cream of the crop were U20 Harriers Jamie Anderson’s 1.90 high jump clearance and Dominic Allen’s 4m extension to his javelin pb. This was Anderson’s ﬁrst attempt at this height this season, having had a few unsuccessful attempts last year, and is a signiﬁcant milestone to achieve, clearing it on his ﬁrst attempt to the joy of the captivated crowd. Allen’s new lifetime best javelin throw of 57.12 puts him 4th in the early season national rankings and gives him the national entry standard required for the English Schools Championships in July.

Harriers have a talented group of young U15 throwers, and Josh Tyler, who broke the club hammer record last week, once again did not disappoint with 1st place in hammer (38.39) and shot putt (11.64), and 2nd in discus (33.49). Craig Moncur also did well in the throws with a couple of 3rd places in shot putt and discus (9.92 & 29.03), both new lifetime bests, also achieving a new long jump best of 4.89 for ﬁrst place, adding 30cm to his previous pb. Matthew Williams claimed a win in triple jump (9.87) and 3rd in high jump with a new lifetime best of 1.40, just pipped by Nathan Blatchford who also cleared 1.40 and claimed 2nd on count back, but lost out to Williams in the triple jump with his 2nd placed leap of 9.63. Lee Dart claimed a good win in the 200 in 26.9, also a new lifetime best. 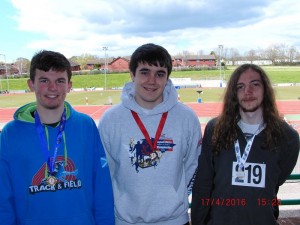