Guest of Honour at the Exeter Harriers’ Annual Presentation of Awards Evening was inspirational elite athlete and Harriers club member Jo Pavey, who took great pleasure in presenting the awards. Tickets were sold out prior to the event, which was a notable social occasion for athletes, their coaches, volunteers and parents.

The Junior Awards went to:

Sam Mills – U11 Male Athlete of the Year

Katie Chapman – U11 Female Athlete of the Year

Isobel Pinsky – U13 Female Athlete of the Year

Lauren Coleman – Commitment to the Team

Centenary Cup for Thrower of the Year:

Lucy Smith – Commitment to the Team.

Ollie Berry – Commitment to the Team.

Jo Pavey was herself awarded the Ken Trickey Memorial Cup for Outstanding Club Athlete of the Year following her inspiring performances at the Commonwealth Games and European Championships where she won a bronze and a gold medal.

The final two awards of the evening were presented by Jo, with Irene Brown, Club Chairman, recounting how these two award winners have contributed so much of their time and energy to Exeter Harriers with their varying roles undertaken over a number of years.

The annual Services to Exeter Harriers Shield went to Dave Robinson, who has tirelessly worked for the club, particularly over the last year, picking various jobs and roles as and when they have needed to be done. “The management of the club last year fell to very few, and Dave took on more and more to keep the club running” said Irene. “He has been involved in the management of the club, membership secretary, finance director – quite a technical challenge – and continues with the running of the monthly Exeter Open Meetings and the Women’s team management.”

A Lifetime Achievement Award went to Maurice Ault (pictured below with Jo), recognising sustained service to athletics over a significant number of years. “Maurice has recently retired after 28 years in the sport” said Irene. “He has been involved in the sport up to National level, has been Chairman and Secretary of the Amateur Athletics Association, on committees of the South East of England AA, and at club level has been chairman, secretary, team manager, coach and official. In 2002 Maurice moved to Devon and joined Exeter Harriers where, amongst other duties, he managed the Senior Men’s Team and took them to the Men’s Southern League championship title in 2007. The team qualified for the British Athletics League, a major achievement as we were the first Men’s team in the BAL from the South West, gaining promotion to Div 3 in 2009 and Div 2 in 2010” continued Irene, “and his commitment to the team and to the club throughout his time at Harriers has been excellent.”

On accepting the award Maurice said “During my 28 years in athletics I think I have done just about every task in the sport that has been my passion and absorbing interest throughout those years. I was also a serious road, cross country and track competing athlete when younger. For me to receive from Exeter Harriers this award was such a surprise and is the best way for my retirement to be marked. To facilitate the development of young people is one of the most rewarding activities us older folk can do.” Exeter Harriers wishes Maurice all the very best on his retirement. 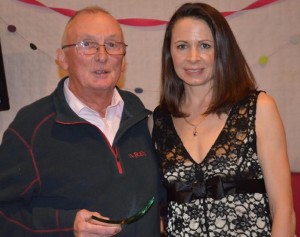 For all images from the evening visit our gallery page