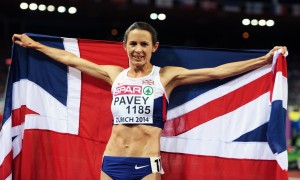 Jo Pavey has been made an MBE for services to athletics in the Queen’s Birthday Honours.

The 41-year-old, Exeter Harrier, won her first major title last year, with success at the European Championships in Zurich coming just 10 days after she claimed 5000m bronze at the Glasgow Commonwealth Games.

She recently announced how she does not intend to target this summer’s IAAF World Championships in Beijing but will instead focus on working towards what would be her fifth Olympic Games in Rio next year.

The BBC quoted Pavey as saying: “Everything has been a big surprise and to get something like an MBE is just another surprise – it’s all so surreal.”

She later tweeted: “Huge honour to receive an MBE. Big surprise when I was told. Thank you so much for all the nice messages.”