I have been filled with immense sadness that Tony White, who coached so many athletes at the club, passed away on 24th August. My thoughts are with his family and all that knew him.

Tony did so much for so many and I will always be grateful for all the help and support he gave to me. He coached me as a young athlete and I feel fortunate to have been able to stay in contact with him over the years. He was a great friend who was always there if you wanted to have a chat, and he always had so much knowledge of the sport. Tony was an exceptional man who was passionate about what he did and embodied everything that is good about athletics. For many, many years, out of pure kindness and love of the sport, Tony coached at Exeter Harriers on club nights and went to events at weekends with his athletes. He would always be there selflessly volunteering so that others could benefit from his time and knowledge to enable them to follow their passion.

When I first joined Exeter Harriers I enjoyed trying lots of different events with coaches at the club, this gave me a fantastic start. After a while Tony asked me if I would like to join his group which specialised in distance running. I felt extremely flattered, I looked up to the athletes in his group, many had won medals at the British Championships and English Schools, so I couldn’t believe that I had the opportunity to be in the squad. I was excited and soon settled in to the group.

Tony put a lot of thought into the training sessions and took the time to analyse specific target times for each individual athlete. He was always interested in absolutely everyone in his group and gave his athletes the chance to reach their potential. You could always rely on Tony to be there at the track with his stop watch encouraging his athletes, even in the midst of winter in freezing conditions or in the pouring rain. The training was often tough but it got you fit and it was always pleasing to be able to tell Tony if you’d achieved the targets he’d set.

During my younger years at the club, I gained running experience, made lots of friends and was able to discover my life long passion for running. Under Tony’s guidance I was also fortunate to have some pleasing results at championships in the UK including winning the English Schools Junior Girls 1500m in Yeovil, in 1988, and some other national titles. Experiencing championship running at that stage of my life really made me feel excited about racing and stood me in good stead for going to championships as a senior.

Through joining Tony’s group I also met my husband, Gav, and we now have two lovely children, Jacob and Emily. In fact running and being in the group at Exeter Harriers has shaped my whole life. When Gav was going to ask me out he asked Tony what he thought about the idea first, I think this is a measure of how much we both thought of Tony.  My husband and I both feel so fortunate to have had Tony as an important person in our lives. It was always great to chat to him about fond memories at the club as well as plans for the future as he always had good ideas.

Tony was one of the most inspiring people you could ever have the honour to meet. He had eye sight problems all his life but he never let it hold him back. Even in later years, when he sadly became completely blind, he still continued to coach at the club. He wanted to ensure that he was still able to help his athletes. The wonderful Les Curtis, who’s now over 90, assisted Tony enabling him to continue. Les was regularly there with Tony over the years, so we’re also very grateful for the help he gave to Tony and to us. In the winter Tony used to set us a run around Exeter.  We used to run as well as we could whilst Tony and Les jumped out of the car, at each mile point, to shout out our times and cheer us on. Sometimes it felt quite hard but seeing Tony and Les on route always made me feel motivated to try my best. 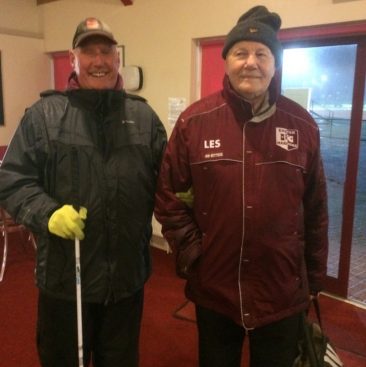 Tony was such an inspirational person away from athletics too. Even though he was blind, Tony was determined to keep active, walking 5 or 6 miles a day with his guide dog. He had the most incredible mindset and determination to overcome adversity and you would never hear him complain. Despite his own problems he was also the main carer for his lovely wife, Chris, when she became ill.  She sadly died a few years ago after a long illness. Tony would often speak about all his wonderful family including all his grandsons. He lived with his grandson Callum for a while, who used to come up to the club and his partner Caitlin, when he became ill. They were such a tremendous support to him.

In 2007 I was honoured to nominate Tony for the Unsung Hero Award at the BBC Southwest Sports Award. He won this award and went on to the finals at the BBC Sports Personality of the Year. It was also such a pleasure to present Tony with a Lifetime Achievement Award at the Exeter Harriers Awards’ Evening, in  in recognition for all the years he had put into the club and the many athletes he had helped to achieve their goals. 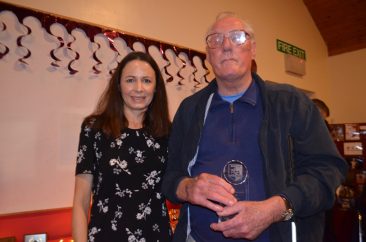 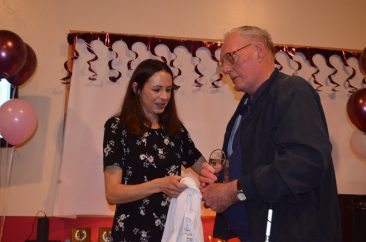 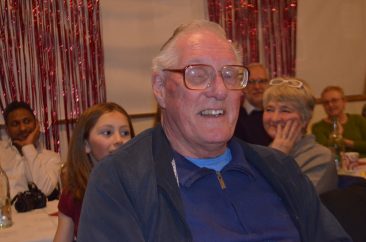 Running has enabled me to have so many amazing experiences and to meet so many wonderful people. I have precious memories of standing on a start line and gazing up at an Olympic flame. I’ve been lucky enough to do this at five different Games. Each time I have always paused to take in the moment and to remember those that have helped me. A simple moment of reflection and acknowledgement before the gun fires. I would always think of Tony and be thankful for the big part that he played in my running career.

Tony was a amazing example of a volunteer coach providing the opportunity for others to develop their ability and enjoy all the fantastic benefits of sport. Thank you to all the coaches at Exeter Harriers who are at the club now giving their time to the next generations of athletes coming through.

My husband and I, our families and so many athletes will hold on to many happy memories of Tony and be forever thankful for all he did. R.I.P. Tony, you will always be in our thoughts.