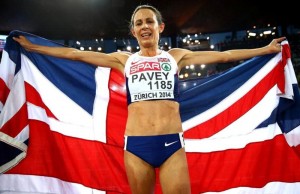 Our very own Exeter Harrier Jo Pavey became the oldest woman ever to claim gold at a European Championships when she won a thrilling 10,000m and got Team GB’s campaign in Zurich off to the perfect start.

She ran the perfect tactical race to match the gold won by her old friend Paula Radcliffe in Munich 12 years ago. With France’s Clemence Calvin 16 years her junior and almost 20 seconds faster this season, Jo knew she was up against it but when Calvin went to the front with two laps to go Pavey tucked in behind. Then, at the bell, Jo surged into the lead, held Calvin at bay on the back straight and kicked hard again as she came off the top bend to race to her first ever major title.

Pavey told BBC Sport: “I just can’t believe it. I was finding it quite a long way – I was thinking, is this the right event?

“I’m really thrilled. I tried to do a controlled last lap, but when I got to the home straight I thought, just give it all you’ve got, so you don’t regret anything.”

A truly outstanding 10 days for Jo and what pleasure it is to have her in her club. Can she win the 5000 metres later in the week? Well on the form she is showing at the moment she will definitely be very close.