14 year old, Exeter Harrier, Josh Tyler added almost 3m to his lifetime best in the U15 hammer at the Par Spring Warm-Up Meeting and in doing so broke the 18 year old club age group record held by Paul Delbaere since 1998. He bettered the previous record of 39.95 with his ﬁrst round throw of 40.03, placing him third in the National Age Group rankings and easily surpassing the English Schools entry standard of 38.00. Tyler, who holds the U13 club record, was conﬁdently chasing this U15 record after a succession of personal best performances in Plymouth a couple of weeks ago, and at Par also equalled his lifetime best to take ﬁrst place in the shot putt with 11.44 and claimed second in the discus with 29.05, also a new lifetime best for the young throws specialist. All this despite encountering rain, hail, and a bitterly cold wind. His next competition will be on home ground this weekend at the Ken Trickey Great West Open at Exeter Arena. 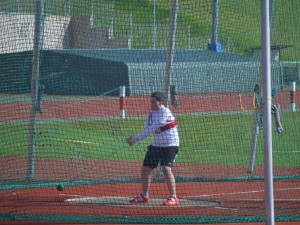 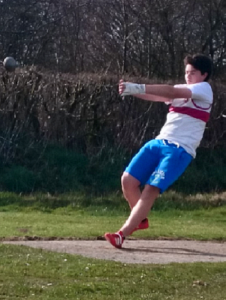