Mark Palmer is off to Bloemfontein, South Africa, next month, to compete at the IAADS (International Athletics for Athletes with Down’s Syndrome) World Championships.

Mark, pictured below, previously won Bronze in the 400m at the 2014 European Championships in Portugal. He will now form part of the GB Team competing against 10 other countries including; Austria, Brazil, Costa Rica, Finland, France, Italy, Portugal, South Africa, Turkmenistan and Venezuela. 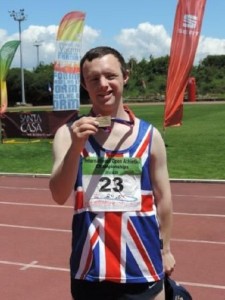 The opportunity to be competitive enhances so many aspects of the life of an athlete with Down’s Syndrome; Exercise and the development of skills, encouraging fitness and well-being. In addition, taking part in competitions and being a member of a club or a team gives many opportunities to socialise and develop friendships. Not to mention the opportunity to travel to competitions world-wide.

Mark was also nominated for the Express and Echo “Disabled Sports Personality of the Year” and recently had a short film made about his athletic achievements.

If you’d like to find out more about IAADS, Down’s Syndrome or Exeter Harrier’s Equity Policy please see the links below