Exeter Harriers’ Fin McLear tore through the opposition to claim victory with ease in the Devon
County Cross Country Championships at the Eastern Fields course in Exeter. McLear dominated
the U17 5km race to claim the championship title, finishing almost half a minute ahead Callum
Choules of North Devon. “Fin was the first race of the day” said Harriers’ endurance coach Brian
O’Hare, “and he set the standard, he’s been training really hard recently and has told me that he is
concentrating on the schools competitions this winter, but I would advise him to do the Nationals.”
Owen Coldwell and Alfie Devine-Wright also ran well for 5th and 7th places behind McLear.
Elliot Moran performed well to claim the runner-up spot in the U15 3.9km race, with Lee Dart 3rd
and Sam Pyne 7th. “Elliot suffered an ankle injury in a schools race on Thursday and I would have
advised him not to run, but I knew he would,” said O’Hare. “He ran well.”
Newcomer Harrison Sime, a talented all-rounder, ran exceptionally well to win the U13 3km race,
taking the title by just 1sec from club-mate Johnny Livingstone in a battle for the line, with Louis
Chamberlain in 10th.
Harriers had another superb win with Jake Smith taking the U20 8.9km title, Patrick Livingstone
coming in 3rd, Shaun Johnson fifth, Joe Chamberlain 7th and Mike Thornton 14th.
Howard Bailey claimed 10th in the Senior 8.9km, with Adam Stobbs third in the M45 and Pater
Chamberlain second in M50.
The U11 boys race saw the experienced Sam Mills push to victory, 6 secs ahead of rival Xavier Bly
from Dartmouth AC, and with many of the young athletes competing in their first cross country
championships Max Broomby did well for 3rd in a closely fought battle with Archie Guiness in 4th,
both being given the same finishing time. Charlie Hague came in 8th and Harrison Stone 32nd.
The U11 girls race was won in style by Scarlet Livingstone, with Lucy Broomby and Isabella Peyton-
Jones finishing well in 3rd and 5th respectively. Aimee Blatchford placed 11th, Annabel Tucker
12th, Leah Blight 21st, Rhianna Field 22nd, Isabelle Field 23rd and Martha Hallmark 24th.
Caitlin Smith ran well to take 3rd in the U13 3km with Brooke Coldwell 4th, Jasmine Stone 14th,
Samidi Nanayakkara 18th and Poppy Tooze 23rd.
Molly Canham (Newton Abbot AC) was the eventual winner of theU15 3.9km race, with Caitlin
Apps unlucky with her 3rd place finish having led into the final turn but, misguided by the course
markings almost took a wrong turn, allowing Canham and Natasha Farrington of Tavistock AC to
push on past. “Caitlin was gutted” said O’Hare, “but she has proved that she has the ability and
can do it.” Runa Manby took the 5th spot, Anna Downs 13th, Sophie Burden 16th, Courtney
Howard 17th and Katelyn Wells 19th.
Phoebe Killen placed a good 2nd in the U17 5km race. “Phoebe suffered a hip injury last year and
I’m pleased she is now back to the form she showed 2 years ago” said O’Hare. Florence
Livingstone came 4th, Madeleine Roche 6th and Lauren Coleman 7th.
Katie Olding showed good form to claim the runner-up spot in the U20 5km race, with Zoe Kuyken
following in 3rd. Josie Wilson placed 13th in the Senior 5km with Catherine Harman finishing in
19th.
For full results visit the City Runs website 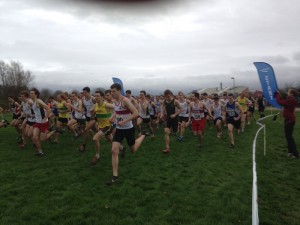