14 year old Exeter Harrier Molly Canham showed maturity beyond her years as she took on the cream of the country’s middle distance runners at the Watford BMC Grand Prix, knocking over 2 seconds off her lifetime best in the 800 to clock 2:07.84. This places Molly ﬁrmly on top of the current UK U15 rankings, opening up quite a gap between her and 2nd placed Olivia Mason of County Durham, and gives her the accolade of 5th place on the National all-time U15 list, and had she been a year older would have given her the qualifying time for this year’s European Youth Championships.

In near perfect weather conditions Molly pushed forward from the gun, clocking a stunning 12.5 secs for the ﬁrst 100 and passing the half way mark in 62 secs.

‘I was really pleased to be invited a year early,’ said Molly, ‘and I wanted to prove I could compete at that level so I went out aiming for a PB. I treated it as a championship race rather than a time trial and I knew some of the women in my race were a bit quicker than me so if I stuck with them I might improve my time.’

‘Molly had an amazing run’ said her mum, Catherine, ‘they don’t usually allow U15s to race in the Grand Prix races but had allowed both the top ranking girl and boy this time.’ Molly, who came in 2nd in the C race, spurred on by the class graded ﬁeld, was 0.23 sec behind the winner, and this outstanding run has resulted in an invitation to join one of the country’s top middle distance training  groups in Birmingham from time to time under lead coach Bud Baldaro.

Plan of action for Molly for the coming weeks in the build-up to the English Schools Championships in Gateshead at the beginning of July, where she took silver last year, is to pare down the number of races and focus on the preliminary schools’ rounds, also competing this weekend in the PB Classic at Milton Keynes. 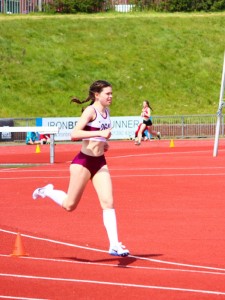