A mother of a world record-breaking young athlete has sacrificed her rented home and become homeless, staying on friends’ sofas, as she attempts to keep funding her son’s dream of qualifying for the 2020 Olympics.
Rising star Sam Talbot, who competes for Exeter Harriers, smashed Daley Thompson’s 40-year-old British under-18 decathlon record last year, and also broke the under-18 indoor heptathlon world record earlier this year.
When breaking the world record, he cleared 7.51m in the long jump to become the new under-18 British record holder, earning him an invite to jump alongside the likes of Greg Rutherford at the National Indoor Championships in Sheffield.

It looks like Talbot, who is currently at boarding school, will have a hugely successful career in athletics if he continues to develop at the same rate he has been

However, this requires funding, and mother Lynn Talbot realised last year that, despite her best efforts, it was no longer affordable to continue paying for her son’s dreams, and she has decided to make the heart-breaking decision of no longer being able to live as a family in order to help him, instead choosing to become temporarily homeless until their former family home is sold.

She said: “It became clear in December 2015 that Sam’s athletics was no longer affordable.

“We discussed the situation and the decision was made to give up our rented house until the sale of our former family home.

“We all know what an amazing young man Sam is and I believe that every child should be given the opportunities to achieve their dreams and potential.

“Sam has the full support of his school, who have backed him completely by giving him free schooling and boarding from this time.”

With the cost of Sam’s training now in excess of £1,300 per month, Lynn has been relying on the support of friends to let her stay with them, whilst the young athlete has been supported by grants and gifts due to a lack of sponsorship.

“I’ve been really fortunate as Nike give me free kit,” Sam said. “I received some funding last year too.

“Money from Sports Aid helped towards warm weather training for me and other grants received were greatly appreciated but they didn’t even cover a full month of costs.

“As I’m a decathlete, major sponsorship is hard to get until I perform at under-23 level as this is when the weights of the implements and hurdle height is the same as senior level.

“For female heptathletes the weights and hurdles height changes are sooner.”

Added his mother: “We are very, very grateful for all the funding Sam has received.

“We have tried to save money in different ways; I’ve started a soft tissue therapy course and now massage Sam and acupuncture his shin splints on a maintenance basis most weeks, but he also needs specialised physiotherapy once a fortnight alongside this.”

Talbot has also had the support of his elder sisters, Amy and Lauren, with the likes of taxiing duties or dashing to the airport with his passport to enable him to compete in international events.

Amy said: “We are all incredibly proud of Sam.

“His hard work and dedication, both on and off the track, is such an inspiration to all that know him.

“He has already achieved so much, to become a world record holder and to be selected for Team GB on four separate occasions and more recently as a Team GB Captain is simply outstanding.

“Not only does have the natural skill but the dedication to continue and strive in athletics and I have no doubt in years to come he will be an inspiration to so many up and coming athletes.”

Lauren added: “Sam puts in an unbelievable amount of time and dedication but unfortunately decathlon is a hugely expensive discipline.

“It would be a great shame to let the cost of his sport hold him back from achieving what we all know he is capable of, not only to do himself proud, his family proud, Exeter Harriers proud and his coaches proud but also his country.”

Sam and his mother are on the lookout for sponsorship from local and national companies, with the ultimate aim being sponsorship from a car dealership, in order to provide an economical car, which, at the moment, is unaffordable, and would cut costs dramatically. 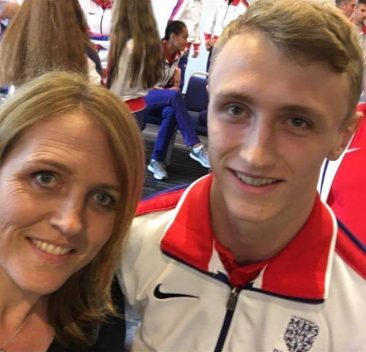 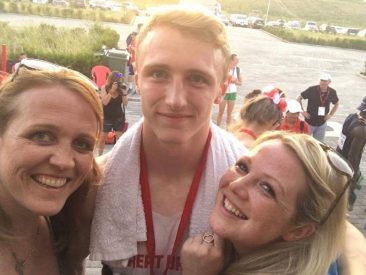 Anyone interested in sponsoring Sam, on any level, should get in contact with Echo Sport reporter David Byrom at david.byrom@expressandecho.co.uk.