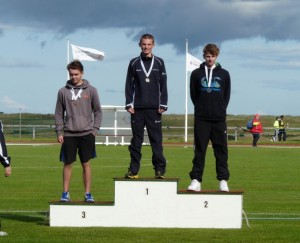 Exeter Harriers’ promising young javelin prospect Jack Moncur has won gold at the Scottish U17 National Age Group Championships in Aberdeen. In blustery conditions and with strong headwinds the poor weather conditions held the competition up by half an hour, and when warmup finally commenced the athletes were restricted to one practice throw each. 15 year old Moncur, hoping to replicate his U15 National Title from last year, took the lead in the second round, albeit a small lead, with 45.97, consolidating well in round three with his best overall throw of 48.52. With the weather conditions worsening Moncur could not extend his lead further in the final three rounds but he had done enough to clinch the title, eventually taking gold by more than three metres over Bobby Crossan of Kilbarchan. “I’m pleased with the win” said Moncur, “I had a plan which I followed but I needed to adjust because of the weather conditions, and I’m disappointed we couldn’t throw from the other end of the arena and take advantage of the weather conditions.”

11 year old Craig Moncur, competing in his first National Championships, had a lot to contend with in the build-up to his U13 800 heat, experiencing the rigid formalities of the call-room for the first time, and the starter delaying the race with two green card warnings on the start line. Moncur was disappointed with seventh in his heat in a time of 2:41.82 but will undoubtedly gain from the experience in the longer term.