Exeter Harriers are celebrating after rounding off the season with a superb overall runner-up position in Division 1 of the South West League, beaten by a mere 38 points by Taunton AC. “It’s very encouraging for the future of the club that we have achieved this position in the South West League” said Club Chairman Irene Brown. “It’s been a difficult season for our senior teams in their respective national leagues, but this has been one of our best years in a long while in this league. The league requires a strong base of athletes across all the age groups, and it’s particularly pleasing that we have been convincing winners in the Junior age groups. This bodes well for building the next generation of athletes as our Juniors begin to filter up through the age groups, and with Exeter and the surrounding area now producing some of the most promising young athletes in the Region the future looks exciting,” said Brown “and I would also pay credit to the hard work put in by the team managers and a great team of club coaches.”

Consistently outstanding results have been seen in the U13 girls and boys and the U15 girls and boys age groups across the entire season, with all four groups winning their South West League sections, and superb results from the U13s, including Theodore Jackson Clist, Katie Chapman and Rachel Champion who all remain undefeated in the league this season in two events apiece.

Champion achieved the sprint double once again, taking wins in the 100 in 13.70 and 200 in 27.93, and Chapman equalled her own league record in the high jump with 1.50 and was just 6cm off the long jump record with her winning leap of 4.70, also taking second in the shot putt with 7.87. Rebecca Squires achieved two second places behind Champion in the sprints with new lifetime bests of 13.96 for 100 and 29.36 in 200, India Leetham is seeing a welcome return to form in the high jump with a new lifetime best of 1.40 for third place, and Harriette Bond also saw a new PB in the long jump of 4.11 for second behind Chapman. The formidable relay team of Leetham, Chapman, Squires and anchored by Champion easily took first place in 56.48, just half a second outside the league record.

Sam Gooding had a good day with first place in U15 triple jump with 11.16 and third in both 100 and high jump with 12.46 and 1.60 respectively. Middle distance specialist Elliot Moran again outperformed his rivals to take first place in the 800 in 2:08.95 and showed how versatile he is on the track with second place in the 200 in 25.67.

Sam Dove took a win in the U17 long jump with 5.61 and claimed third in discus with 25.70, and newcomer Tapuwa Mekonoweshuro achieved valuable points with first place in the U20 triple jump with 12.80 and third in high jump with 1.65, and Christian Pugsley claimed second in hammer with 17.32. Jevgeni Judin had a terrific run in the Senior 800, taking second in 2:00.98, just a fraction outside his lifetime best, and Dominic Allen competed in the age group above to claim third in javelin with 50.78. 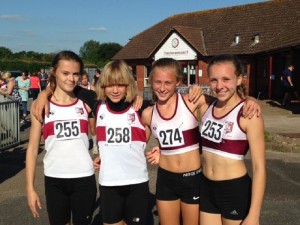