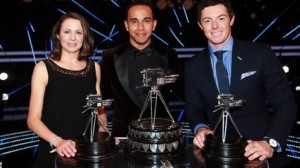 Congratulations from everyone at the club goes to Jo Pavey who came a brilliant third behind Mcllroy (2nd) and winner Lewis Hamilton at the BBC Sports Personality of the Year awards in Glasgow on Sunday evening.

She has had an outstanding year where she came into the public eye when she took bronze in an epic battle in the 5000 metres against the Kenyan athletes which left the Commonwealth’s best distance runners in their wake. What many people do not know is that Jo actually broke the world record for women over 40 by almost 12 seconds.

She then went on to take European 10,000m gold – becoming the oldest ever European Championship 10,000m champion. Her win cemented her hero next door status that came when people heard of how the mother of two had taken that Commonwealth Bronze aged 40, while also juggling family life. Given she was approaching her 41st birthday it also showed a reward for years of dedication and commitment to the sport.

Jo had only returned to the track in May, when she won the England and British 10,000m Championship eight months after giving birth to her second child.