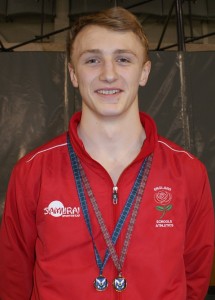 Exeter Harriers’ top young multi-eventer Sam Talbot has brought home individual silver and team gold following a day of superb performances at the Home Countries Schools’ Combined Events International at the Emirates Arena, Glasgow. Representing England U18s, Talbot, also a promising rugby player, earned his international vest following his third place finish at the English Schools Championships in September, but a couple of weeks ago faced a dilemma when news came through that he had been selected for the England SW Regional rugby trials, due to take place the same day. Talbot, who is part of the Exeter Chiefs elite development squad, had a tough decision to make, opting to stay with his original commitment of the Schools’ International.

New lifetime bests came thick and fast in the hurdles, 200m and shot putt, and a massive new best total points score. ‘My hurdles were messy but still quick and it placed me first going into the shot. I’ve recently changed my whole shot putt technique and it was great to see it was a good move. The 200m was nowhere near perfect, I practically fell out of the blocks due to the banking of the indoor track which I’m not used to.’ Talbot was bitterly disappointed with his long jump, 22cm off his best. ‘I didn’t get on the board once, and didn’t land one jump properly.’

Going into the final event Talbot was 45 points off first place and just 8 points ahead of third but he showed his metal in the 800m, clocking just outside his PB. It was a tense wait for the final result, with Talbot losing the top spot by just 5 points to Daniel Ryan of Ireland, but securing silver over team mate Joseph Hobson. His superb points score helped England to the team gold.