Exeter Harrier Sam Talbot was disappointed to be disqualified from the 400m as it cost him the chance of having a competitive decathlon score at the World Youth Games.

The 16-year-old represented Great Britain at the event in Columbia, earlier this month, and ended up 21st. However, after opening the competition with a personal best 100m time of 11.07secs – the third best of all the decathletes – and also having the third best long jump of 7.12m, Talbot was hoping for better. He ended up with 6,257 points, less than 800 away from a place in the top 10.
Talbot said: “I stepped on the line three times (in the 400m) and once actually over it and that’s not allowed.

“I was most pleased with the pole vault because that was my first time over four metres.

“The track was very quick and it felt good, I was just unfortunate to get a DQ. Apart from that it would have been a decent decathlon.”

After his blistering start, Talbot threw 13.25m in the shot put and had a best of 1.72m in the high jump, before day one ended with his disqualification in the 400m.

Day two went much better, however, with new PBs in the 110m hurdles, javelin, and pole vault.

Talbot, who received a grant from the Express & Echo and Exeter City Council Sports Foundation earlier this summer, believes there is a lot more to come from him in the future.

“If you look at all my events, there are definitely areas to work on,” he said. “None of my events are anywhere near what they can be.

“The 100m was a little disappointing because I fell out of the blocks and didn’t get away. It was a quick track and I was hoping for sub-11, if not more.”

Talbot was competing against athletes a year older than himself in Columbia, but is looking forward to next summer’s competitions already.

And he believes his experiences in Columbia will stand him in good stead in 2016.

“It was my first real international competition, it was very different to what I’m used to.

“It was a huge honour to represent Great Britain.”

Talented all-rounder Talbot is now heading to Argentina on a rugby tour with his school. 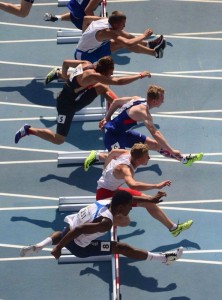 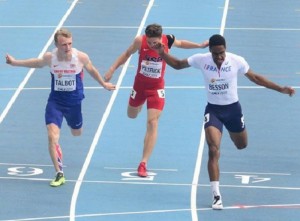