Sam Talbot secured Gold, in the U18 Men’s Decathlon, at the England Athletics Combined Events Championships held at Bedford on 14th & 15th May.

Sam Talbot (Club: Exeter Harriers, Coach: Eldon Lake) carried his strong form of Day One into the second day of this event and was rewarded with a 7000 points plus total and the European Youth’s qualifying standard. 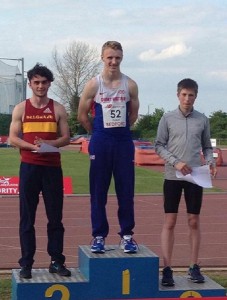