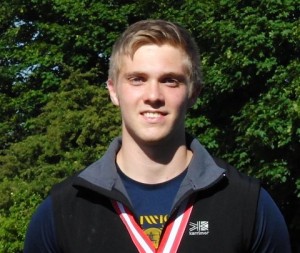 Steve Turnock, in a stunning return to form following injury, gained silver in the javelin at the BUCS Championships in Bedford after almost a year out. Having only thrown twice in competition since last May Turnock, competing for Cardiff Met University, was hoping just to get through the competition after missing winter training due to injuries and studies. “I wanted to help my Uni get as many points as we could but I knew it would be a difficult comp. We had to qualify on the Sunday and I had only taken a few throws this year so I wasn’t sure how my elbow and shoulder would stand up to throwing two days running. Luckily I qualified with my first throw so managed to save myself for the final. During the final Turnock’s confidence grew as he built on each round throw, managing to throw harder each time. “My final round throw of 64.94 was enough to get me the silver medal. It’s been a hard road back to fitness and I still have a way to go, but I felt good today and hopefully will improve over the season.”

Lucy Smith (Marjon) reached the final of the javelin with her best throw of 36.06 in the qualifying round, to place eleventh in the final with 35.28.