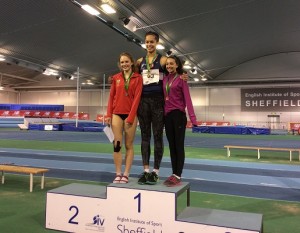 Exciting times are ahead for Exeter Harriers’ top two young multi eventers as they continue to build on their performances and experiences. Sam Talbot and Anya Turner, both 16, travelled to Sheffield to compete in the National Age Group Combined Events Championships and their results speak volumes for the way these two athletes are progressing and maturing. Both suffered injuries which hampered their performances, but a determination to succeed as best they could pulled them through the five events for Turner and seven for Talbot. Turner broke the 3000 points barrier for the first time and Talbot went all the way in achieving phenomenal performances to not only win gold but setting a new British record.

“I was hoping to come top five” said Turner “but I had to reassess and my goal become top 10 because of my injury. I’ve had a knee injury before, but this is something new. I was worried at the start of the hurdles as I didn’t warm up properly. I’d come straight from seeing the physio.” Seeding of the races saw Turner run a gutsy race to come in fifth in the fastest heat, setting a new lifetime best of 9.24.

“My high jump was disappointing, although ok considering my knee” said Turner after a best clearance of 1.57. “Shot putt was really good, I got a new PB of 11.11 even though my knee was really swollen by now.” Turner was struggling to move comfortably, but a respectable 4.88 in the long jump gave her valuable points. “In the 800 I could have gone a lot faster but I was again struggling and I was boxed in at the start, I just couldn’t get out,” but with a time of 2:42.53, just 3 secs off her lifetime best, it was a performance she should feel proud to accomplish. The final result saw Turner easily break the 3000 points barrier for the first time, amassing a superb new points score of 3234 for eighth place overall, and taking the silver medal in the Midland Championships regional result.

Sam Talbot, competing in the U17 two day heptathlon, was one of the pre-event favourites following two national titles in the 60m hurdles and long jump two weeks ago, and the accomplished rivalry with Max Price of Stevenage was evident with Talbot stamping his mark from the first event but continually pushed by Price throughout the two days.

Talbot won the 60m with a new lifetime best of 7.05. He pushed further ahead by some 200 points following a superb long jump of 6.87 to Price’s 6.25. “I was a bit disappointed with it. Although the distance was only 5cm off my PB it should have been a lot longer. I took off way short of the board and dropped my arm where I landed.”

Price closed the gap, but only slightly, following the shot putt. “My warm-up was good” said Talbot “and I threw about 13.50m but when it came to the rounds I didn’t get anywhere near this and only managed 12.39.”

Price then took full advantage in his best event, high jump, overpowering Talbot’s lead by clearing 1.90 to Talbot’s below-par 1.69. “This was the lowest point as I injured my ankle in the warm-up and had to rush to the physio to get it strapped. I couldn’t run the curve properly so had no speed in my jump to carry me over the bar.” Price then took the overnight lead by 13 points.

Day two requires the fine balance of technical requirements and stamina, and it was Talbot’s turn to push himself in his main event, the 60 hurdles. With Talbot’s PB 8.00 sec he would have liked to have dipped under the 8 sec barrier this time, and came so close, clocking 8.01 and amassing 979 points, by far Talbots highest points earning event.

A solid pole vault of 3.25 by Talbot, just 5cm off his PB, saw Price again take advantage with a 3.55 clearance to leave Talbot just 4 points in the lead going into the final event.

This is where Talbot showed his mettle. Knowing he had to beat Price in the final event to take the title, there was also the Championship record to focus on. Talbot and his coach (Eldon Lake) calculated he would need to run roughly his current PB in the 1000m. “I planned to run 34 sec laps but truthfully wasn’t expecting to stick anywhere near to it. I went out hard and tried to maintain speed through the middle laps. I was 3 secs behind target at 600m. By 800m I was 5 secs behind and kicking hard. I managed to run a 32 sec last lap to finish in 2:53.68. I was delighted.” Talbot smashed his PB by almost 10 secs, a remarkable achievement considering he had competed in six other events over the weekend. He took the national title and broke the UK record, obliterating the previous UK record by more than 100 points with his score of 4939. “It was a great weekend but I’ve got no time to dwell on it as I’m going to have to push myself even harder to qualify for the World Youth Championships in July.”

If anyone is interested in sponsoring Sam to assist in his progress please email lynn.talbot@hotmail.com