Talented 14 year old multi-eventer Jack Turner continues to go from strength to strength with outstanding results from the SW Schools Combined Events Championships at Yeovil. The Exeter Harrier (Wellington School) had earlier in the season won the Somerset Schools Championships with a clean sweep of new lifetime bests in each of the Pentathlon events has done just that again. The PBs came thick and fast for the Somerset Schools athlete, with Turner eventually winning the Regional title with a score of 2824 points, placing him sixth on the All Time Regional Rankings and currently second on the National Age Group Rankings. Turner fired out of the blocks in his first event, the 80 hurdles, gradually pushing ahead to cross the line and dipping below the 12sec barrier for the first time with 11.86. Following shot putt Turner lost his lead despite a new lifetime best of 9.96, but second place was short-lived for Turner as from then on he dominated the competition, retaking the lead with a superb long jump of 5.71, some 20cm improvement on his previous best, following up with a tremendous high jump of 1.77 in which the three remaining athletes had the crowd mesmerised with their superior jumping skills. In the final event Somerset team mate Ollie Thorner pushed Turner on to another new PB of 2:17.16 in the 800, and with the Somerset Schools’ team of 4 amassing a total of 8003 points they obliterated the previous best team score to put them top of the All Time Regional Team Rankings.

Also competing for Somerset Schools was Sam Dove (Kingsmead School) in the IB Octathlon, his third place finish over the two day event with a score of 4050 points included five new lifetime bests. Dove placed eighth after the first event, a new best distance of 5.69 in the long jump, gradually working his way up to sixth after the discus with another new PB of 24.71 and the javelin bringing a tremendous third round throw of 36.30, a three metre PB. Dove was in fourth by the end of day one and maintained that following an excellent new best of 15.59 into a headwind in the 100 hurdles, pushing on for a further superb new lifetime best in the 1500 by 12 secs of 4:42.91.

Anya Turner (Wellington School) also competing for Somerset Schools, placed fourth in the IG Heptathlon with a points total of 4281 and included a good 80 hurdles of 12.13 and a long jump of 5.05, fractionally outside her PB.

Isobel Pinsky (St Peters CofE school) competing for Devon Schools had exceptional all-round performances in the JG Pentathlon finishing third, just 7 points off second. Pinsky’s 75 hurdles of 12.10 was somewhat off her best but she did well to place second, following up with outstanding performances thereafter. A shot putt of 8.07 pushed her down to fourth overall despite a new lifetime best by almost a metre, and she maintained fourth place with an equal PB of 1.55 in the high jump, pulling up to third with a superb long jump of 5.00, adding 21cm to her previous best. The 800 saw Pinsky give it her all, and a time of 2:31.93 clinched third place, 7 points being the narrow margin between her and the second placed athlete, the equivalent of just one second in the 800.

Olivia Dobson (South Dartmoor) was one place behind Pinsky in the JG Pentathlon, scoring 2925 points, a massive new best points score for her by some 200 points, starting with a new PB of 12.10 in a highly competitive 75 hurdles race placing her fourth, followed by a good shot putt of 11.05 which pushed her up to second place. Dobson maintained this position with a solid high jump of 1.58 and long jump of 4.74, but even a good PB in the 800 of 2:49.08 could not quite match Pinsky’s performance.

Jessica Dobson (Exeter College) scored well in the SG Heptathlon to claim third place with a total points score of 4198 which included new PBs in high jump with 1.58, long jump of 4.99 and knocking 2secs off her previous 800 best with 2:34.28.

Sam Gooding (Exmouth CC) was the highest placed member of the Devon Team in the JB Pentathlon, coming ninth with 2343 points, with new PBs in shot putt, long jump and 800m, and Thomas Putt (Uffculme School) placed twelfth with 2253 points with new PBs in 80 hurdles, shot, long jump and 800. Middle distance specialist Elliot Moran (Colyton Grammar) came sixteenth with new PBs in hurdles with 14.07 and high jump 1.38, and ran a superb 800, the fastest of the day, in 2:06.78.

For Devon Isobel Pinsky and Jessica Dobson have gained automatic qualification for the English Schools Combined Events Champs in Bedford in September, with Olivia Dobson having to wait to see is she is selected as one of the top nine scores across the country without automatic selection. For Somerset Jack Turner and Sam Dove have automatic selection, Anya Turner also having that anxious wait. 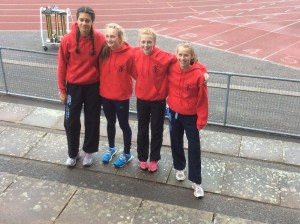 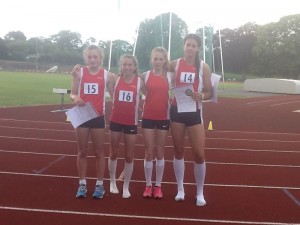 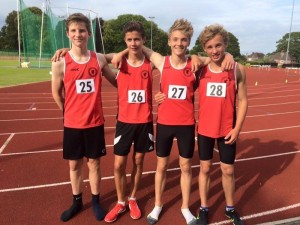 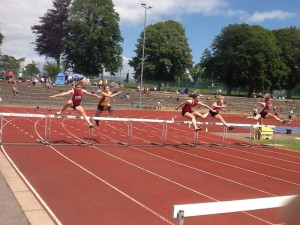 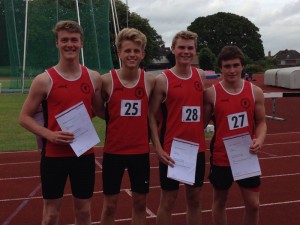 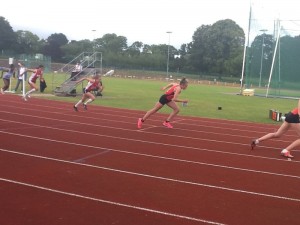 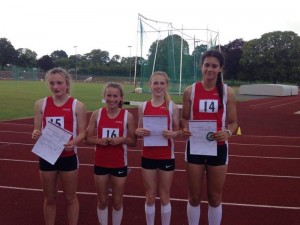